← 3 medical appointments and an MBE
Did you receive chocolate today of us? →

We didn’t make plans for the day. The youngest had asked if we could light our big sister candle and hold hands. 3 of us will be travelling back from festivals. Which brings me nicely to our new plans.

Emily posted a bucket list when she launched Remission Possible.  A few things were achieved during the short period she was in remission.  But during relapse and 300 days in isolation the list became a life list and grew significantly. It is a varied list of treats and challenges. Events and hopes she had for the future.  She was always so positive for the future. I don’t plan on publishing the list just yet. Mainly because there are a few things that involve the support of others. This is very much my plan and I don’t want anyone to feel obliged to help.

So i will start working through the list. Inspired of course by Emily but also by Rachel Mcsheen who I met at the Teenage Cancer Unit.  Recently she asked me while we were crying into a cuppa if I could think about a challenge she could slowly work towards in memory of Emily.  She isn’t in a position to commit much time right now as she has a daughter who needs surgery and a hubby very ill. So its her fault if I drag any of you on this Remission Possible Mission with me.

This weekend we ticked a few off the list. 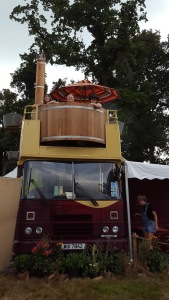 Greenman festival was always a dream of Emily’s. I haven’t been to a festival previously.  So me and Evan (age 12) spent the weekend under canvas.  The tent leaked and leaked. We had to sacrifice a few blankets to make a dam in an attempt to keep a few clothes dry. I loved it. Especially the 2 hours spent in a hot tub drinking proseco on top of a double decker bus

Festival really do things differently than I had imagined.  The food was amazing. This was also the perfect opportunity to try gin for the first time. Me and Emily had discussed at length trying gin & gin fundraisers with the nurses and chaplain at the TCT unit. I have had opportunities to try it since her passing but this felt right time.  So taking in the scenery of Brecon Becons with my cousins Steph & Cristyn and a fellow bather a man from London we sipped gin and tonic.  It was far nicer than the sloe gin I tried while trampling through the mud later the same weekend.  Another item  ticked off the list was to go on holiday with Isaac her godson/ cousin. She was so proud when she was asked to be his godmother and missed him constantly through treatment. Toddlers and cancer treatment don’t mix.  Watching Evan play with his 2,3 & 4 year old cousins it was clear to see Emily’s temperament living on in him. It also gave be time to think about my own childhood with my cousins and how that has grown through out our early years, clubbing years and now parenthood. It lead me to reflect on how much medical conditions have taken from us over many years. Our carefree breakfasts in the park and fluid mealtimes have been replaced by the need to control medical conditions and reduce risk. ( All the children have medical conditions) So the carefree camping was a real opportunity to kick back and relax. Although maybe a new tent would be a good idea.

Myself and Emily may of looked very similar but things that excited her petrify me.

So this is just a taster of what lays ahead.

So a few water challenges for starters.

Join in a boxing day/ New years day swim. We had planned this last year. Unfortunately Emily was unable to walk and was experiencing breathing difficulties in the cold So we decided to postpone until she could watch. Especially as she was upset about missing Cardiff Half.

Paddle boarding. Oh forgot to mention I cant swim. I have a fear of water. Real sweaty palms fear. So should be fun.

Takecare of yourselves and those you love.

← 3 medical appointments and an MBE
Did you receive chocolate today of us? →